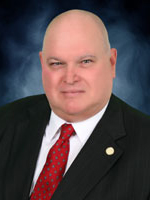 James A. “Jim” Fields lives in Chattanooga, TN with his wife, Pam, and their Golden Retriever, Huckleberry.  Jim and Pam have two daughters and two grandchildren.  Jim is an attorney with the firm of Samples, Jennings, Clem & Fields, PLLC, and is licensed to practice in Tennessee and Georgia.  In addition, Jim is a licensed Real Estate Agent in both Tennessee and Georgia currently with The Raines Group, Inc. He has also taught several college courses in the areas of business law, international law, and the U.S. Constitution.

In 2010, Jim was elected to represent District 2 on the Hamilton County Commission.  He was reelected in 2014 and served two terms as the Vice Chairman and one term as the Chairman.  He chose not to run for a third term of office.